In the previous lesson, we learned that in a reciprocating engine pressurised steam pushes the pistons, which further translates this reciprocating motion to rotary one. There is an efficient way to utilise steam without this piston and cylinder arrangement.

If you recall Newton’s law, every force would have an equal and opposite reaction. You can see this in your garden sprinkler that rotates around an axis as jets of water shoots out of nozzles. A basic steam turbine works similar to that sprinkler where instead of water a jet of pressurised steam is let out of L shaped nozzles out of a steam vessel.

An improvement of the ‘sprinkler-like’ steam engine is the De Laval turbine, where stationary nozzles shot jets of pressurised steam on a revolving wheel made up of vanes as shown in the figure below. 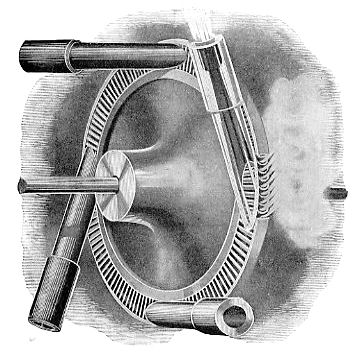 When the steam hits the concave vanes, the kinetic energy of the water molecules are transferred to the wheel and it rotates. This can further be used to drive propellers or generators to produce electricity.

Modern steam turbines are cased with different levels of turbine rotors with movable and static vanes that use the steam efficiently to rotate the shaft. From early battleships to modern nuclear plants, steam turbines have revolutionised the industrial growth like nothing.

Unto the dawn of gleams,
With lyre feathers of dreams,
I fly, and fly, towards the unknown,
Leaping from shoulders of the known.